The US Presidential Election and Indian stock market 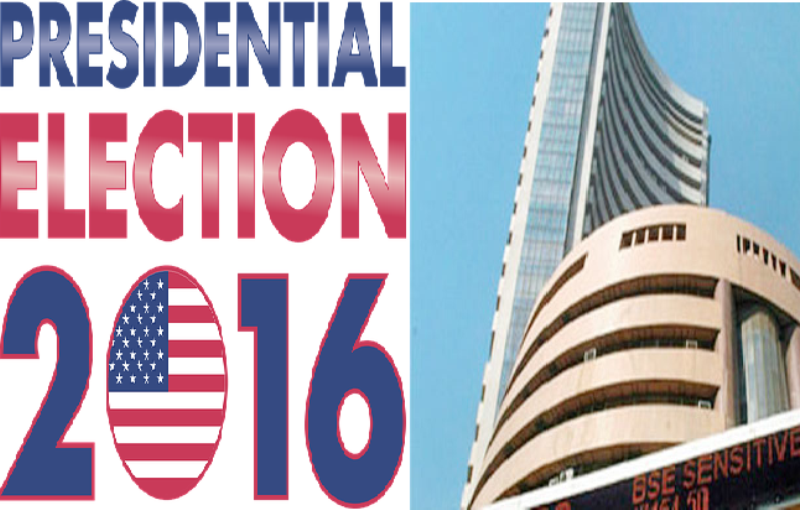 In just a few days the people of United States of America will elect their next President. Latest opinion polls show that, it is going to be a very tight contest between the Democrat Presidential nominee Hillary Clinton and her Republican counterpart Donald Trump. Historically the US stock market favoured Republican win to the White House, but this time it seems that, the situation is different. Market reaction after national elections depends on both the final outcome (the winning candidate and party) and how much of the final outcome (which we still do not know) has been priced in by the market.

It is important for investors to understand that, the market discounts all available information in prices. An uncle of mine, an amateur trader, expressed his frustration to me that, when he bought stocks expecting RBI interest rate cuts, he was not able to make profits, even if the rate cuts, as anticipated, were announced. The reason, why my uncle was not able to make profits is very simple. If a rate cut was widely anticipated, the prices of rate sensitive stocks would have gone up, even before my uncle bought those stocks. I shared the example of my uncle, so that you can understand how stock prices behave before and after a big event.

The US stock market and also the market, here in India, have been under pressure over the past few days due to 2 major event risks, the US Federal Reserve Meeting (with interest rate implications thereof) and the US Election. The Fed meeting is behind us (no rate hike); so let us focus on the Election. I do not understand politics and so in this post, I will stick to the market only. As discussed earlier, the market prices in all publicly available information. So what has the US stock market (and by extension other markets around the world, including India) priced in for the 2016 US Presidential Election. Here lies the problem.

As per a recent CNBC post, a possible Trump win in next week’s election has not yet been fully priced in by the market. As such, the opinion polls are still too close and as per political commentators on either side, it is difficult to call. So what can we expect in the market?

Since, there is uncertainty with respect to the final outcome in the Election, we can be sure of one thing in the coming days, as far as stock markets are concerned; volatility. We do not expect any big directional move in the next few days leading up to the Election Day, but we do expect the market to be volatile. The US market volatility index CBOE VIX index was continuously for the past week or so. Investors have been buying S&P 500 put options in large amounts for portfolio protection, if the election results are unfavourable for the market.

So what can we expect after results are announced? It really depends on the results. As we had discussed earlier, the market over the past few months had been pricing a Clinton win, but the recent volatility shows that, the market is starting to discount a Trump win. With election just 5 days away and the uncertainty surrounding the outcome, as discussed earlier, volatility will rule.

What will be the impact of the election on the Sensex / Nifty?

We are more interested in the impact of the US Election on our market. Stock markets around the world are interconnected through liquidity flows and risk sentiments. What happens in the US market will definitely have an impact on the Sensex and Nifty. The uncertainty around the poll outcome has pushed Nifty below 8,500 by close of trading session today (November 3). We are not political experts and do not know what will happen in the elections; we will simply go by what the data is telling us.

We can see that, investors in India, like in the US stock market, are buying portfolio protection; there is a spurt in open interest (OI) of 8400, 8200 and 8000 strikes November Nifty put options. Spurt in put option open interest means that, investors are expecting the market to fall and therefore, they want to hedge their risk by buying put options. The strike prices where the maximum OI build up take place indicates the levels to which market may fall.

What should investors do?

We will examine this question in two parts, first for short term investors and then for long term investors. There is an old saying in Wall Street that, the market is always right. A short term investment or trading strategy contrary to what the market data is suggesting can be very dangerous. I have said before in my blog that, it is always prudent for investors to avoid event risk. If you have short term positions you should unwind (book profit / loss) it before the event (election in this case), wait patiently for the event to unfold, see how the market absorbs the event outcome and then decide on your future strategy. Please note that, trying to profit from the event by taking short positions, may be equally dangerous. The best course of action in situations involving big event risk is to simply wait and watch.

Let us now discuss the implications of this election for long term investors. Over the past few months, I have seen / heard / read some extreme views on the impact of US elections on the market. One so called expert advised investors to buy gold, because apparently the dollar will have no value if Trump wins the Presidency. We saw similar fear mongering in the media before Brexit and it is really unfortunate. We hope our readers apply logic and not be influenced by some extreme views being floated around by people who want their five minutes of fame on television. Let us now look at the Sensex over the past 25 years.

Look at the Sensex graph; it rose from around 1,000 in 1990 to around 27,400 (by close of trading session on November 3, 2016). In the last 25 years, we had 6 Presidential elections in the US. The US had 3 Presidents; two Democrats (Bill Clinton and Barack Obama) and one Republican (George W Bush). All three Presidents got 2 terms each. The House of Representatives over this period has been controlled both by Democrats and Republicans. The Sensex had a fantastic run, irrespective of who was in the White House. The big stock market crashes had nothing to do with the Elections, though the timing of two major bear markets in 2000 and 2008 may have coincided, but the causes were fundamentally, economics and not politics.

The Sensex had great runs in the tenure of all three Presidents. The Sensex rallied the most in the tenure of George W Bush, but it also has the biggest crash in his tenure. Again, in our opinion, the stock market movement had nothing to do with politics; it was purely the economy.

You may hear some comment saying that, this election is different from all other US Election; Donald Trump is a maverick and different from all previous candidates for the office of the President. I lived in New York for 6 years and Trump is famous in the city as a real estate developer. Trump may be a maverick and some or many of the criticism against him may be justified, but I do believe that, the US constitution is one of the most enlightened constitutions in the world and hopefully there are enough checks and balances built in their system. You will also agree that, the philosophy of democracy in itself has safeguards built against abuse of power which harm the interests of the people. You should also remember that, in the US the Government’s role in business and market is quite limited. This election is too close to call; Hillary Clinton can win, but so can Donald Trump. In our opinion, retail investors in India should not be too worried about the US election outcome. If the election results are unfavourable, the ensuing correction in the market might in fact, be a good opportunity for investors to tactically increase their asset allocation to equities.