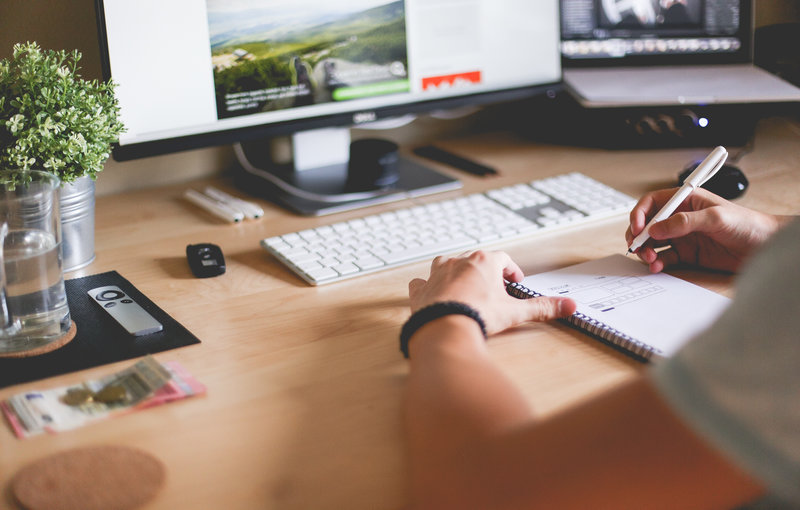 The last 6 months have been interesting for the stock market. After a 3 month rally starting in March, concerns about Brexit, US Interest Rates, uncertainty about the outcome of US Presidential Elections and demonetization have caused the market to be quite volatile. There is short term uncertainty in the market about spread between Indian bond and US bond yields, impact of crude price increase on inflation in India and the impact of demonetization on the Index of Industrial Production (IIP) over the coming months. Over the coming weeks or even months, you will hear conflicting opinions on market direction, which may leave you confused. In our blog, we have repeated a number of times that, investors should remain focused on their own long term financial goals, irrespective of what the market is doing. In this post, we will discuss the impact of short term price movements on long term returns.

Let us do a data driven yet simple experiment. Suppose you wanted to invest 100,000 for a period of 10 years in large cap equity mutual fund in 1996. If you did not want to time the market, you would simply have invested your money in the fund on the first day of the year. However, if you wanted to time the market, you will wait till the market to bottom, in other words, when the price is at its lowest point.

You should understand that, it is virtually impossible to time the market. Equity prices move up and down on a daily basis. Sometimes it is difficult to determine a trend. Let us assume you are savvy enough to detect an uptrend or downtrend; but detecting a trend reversal very early is quite difficult even for “experts”. Experts often have conflicting opinions on market peak or bottom. For the purpose of this experiment, let us assume that, you were extremely lucky and invested when the market was at the lowest point of the year. In this analysis, we have used BSE-100 as the proxy for the large cap fund. BSE-100 was at 831 at the beginning of 1996 and the lowest BSE-100 price in that year was 706. Let us now move 10 years forward to 2006 and see how the investments at the two different price points fared.

We have looked the historical daily price data of BSE-100 over the last 20 years; and saw how much 100,000 invested in BSE-100 at the beginning and at the lowest point of each year, would have grown to over a 10 year investment horizon. Please note that, for investments made in 2007, we have assumed the 10 year horizon to have ended on December 9, 2016. It is not exactly been 10 years since 2007, but we very near to that point.

The table below summarizes the results of our experiment. 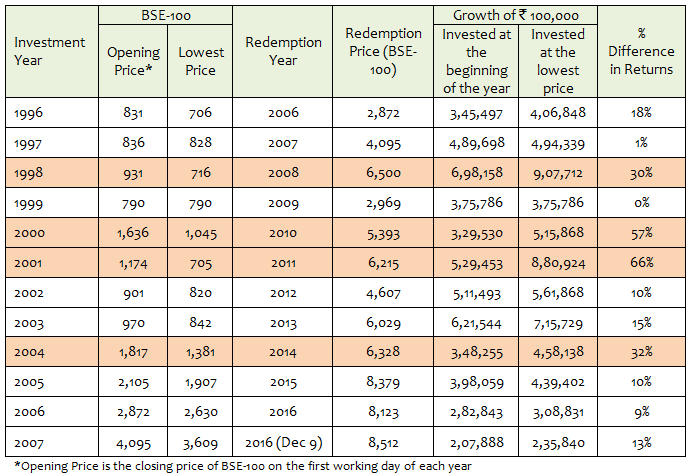 We are data driven in Advisorkhoj and therefore, we refrain from making sweeping generalizations like some commentators do. We are not saying that, timing the market will not give you a significant advantage over a long investment horizon. It can give you an advantage, but only during, what we believe are, periods of extra-ordinary turmoil in the market. We will discuss the circumstances in the years in which market timing would have given investors a substantial advantage in the next paragraph, but you can see in the table above that, 65% of the times, timing the market does not give you a significant advantage.

Let us now discuss the circumstances prevailing in the market in the year shaded pink and we will try to draw some conclusions. 1998 was the height of the Asian Currency Crisis. It started with the devaluation of the Thai currency, followed by the competitive devaluations of currencies of other export oriented East Asian Economies. The deficits in these economies were funded by external debt and the devaluation of these currencies caused panic in the global banking system and capital markets around the world (including India). The years 2000 and 2001 saw the market hit by the dotcom bubble. The Ketan Parekh scam in that period precipitated a settlement payment crisis in the stock exchanges. When the market was reeling under the impact of the dotcom bubble, the terrorist attack in New York City on September 11, 2001, fears of war and impact on oil price, hit markets around the world badly. Finally, in 2004 the market had run up expecting a BJP led NDA victory in the Lok Sabha elections and most opinion polls in India were suggesting the same. However, the market crashed immediately after the elections, when the BJP led NDA was defeated by Congress led UPA.

If you repeat the experiment 2 years later, when you have 10 years data from 2008 – 2018, that market timing advantage is likely to be quite huge. However, all these events, probably with the exception of the UPA win in 2004, were exceptional market events, and in events of these magnitudes it is not possible to determine trend reversal and market bottom, till we get a firm confirmation of uptrend and by that time the prices would have moved up a fair bit.

As discussed earlier in this post, most of the times there is no significant advantage in trying to time the market if you have a long investment horizon. In fact, based on my experience, investors often end up investing at higher prices, when they try to time the market. Historical data over several decades have shown that, equity is the best performing asset class in the long term. Therefore, instead of trying to guess what the market will do next week or next month, if you focus on asset allocation along with a disciplined approach to investing, there is a far greater likelihood that, you will be able to meet all your financial planning goals.