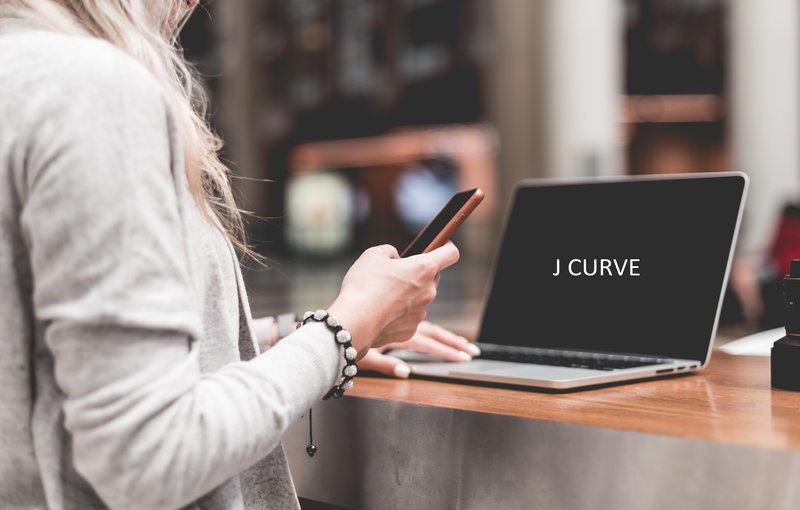 J-Curve effect is an important phenomenon observed in various fields like economics, finance and statistics. The most common manifestation of J-Curve is seen in the impact of currency depreciation on the balance of trade. J-Curve effects can be seen in different areas of economics and businesses. It will be useful for readers to understand the J-Curve effect because it can give them a better understanding of risk.

What is J Curve? 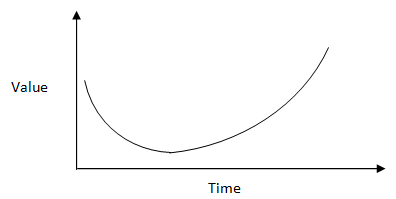 Notice that the curve is shaped like an angled J in upper case (capital letter). Investors, who invested in bull market peaks, would have seen J-curve in action with their own investments. A bear market invariably follows that bull market, when you see your investment dipping in value; but once the bear market ends and bull market resumes, your investment recovers the notional losses and appreciates in value. Let us now discuss various J-curve effects.

J-Curve in Balance of Trade and Currency Depreciation

J-curve effect is seen on balance of trade due to currency depreciation. The J-curve effect is more pronounced in countries, like India, which have trade deficits, i.e. imports in dollar terms is more than exports. Let us understand why we see J-curve in balance of trade due to currency depreciation, with specific reference to our country. Due to our large population and improving lifestyle, India is one of the largest crude oil consumers in the world. Our own crude production is not sufficient to meet the demand and we meet more than 80% of our crude oil requirements through exports. India has to buy crude oil in US Dollars (USD). Therefore, if our Indian Rupee (INR) depreciates versus USD, we have to spend more in order to buy the same amount of crude for our domestic needs. Some readers may ask about the role exports play on Balance of Trade if INR depreciates. India is a major exporter of engineering products, petroleum products, gems and jewellery, pharmaceutical products, textiles etc. When the rupee depreciates, we get less value from our exports in INR terms. Higher cost of imports and lower revenue from exports in INR terms, cause our Balance of Trade to worsen if the INR depreciates versus USD.

But this is the short term effect. In the moderate term, when the prices increase, consumers feel the pinch and they will try to reduce the consumption. If you consuming 100 litres of petrol a month and price increases 5%, you will try to reduce your consumption by at least 5% by turning down air conditioning in your car, using public transport, car-pooling with your friends and neighbours etc. Businesses will try to procure locally manufactured goods, instead of trying to rely on imports. This will reduce the import bill for the country and arrest trade deficit in the moderate term. At the same time, if our currency depreciates the price of Indian goods for foreign consumers will be lower in USD (or other foreign currencies); demand for the products of our exporters will increase and our exporters can take market share away from exporters of other countries due to price competitiveness. While this will not happen overnight, it has been seen that, currency depreciation helps exporters. All these factors combined result in the J-curve for Balance of Trade.

The chart below shows the GDP Growth of India at 2004 – 05 and current prices. 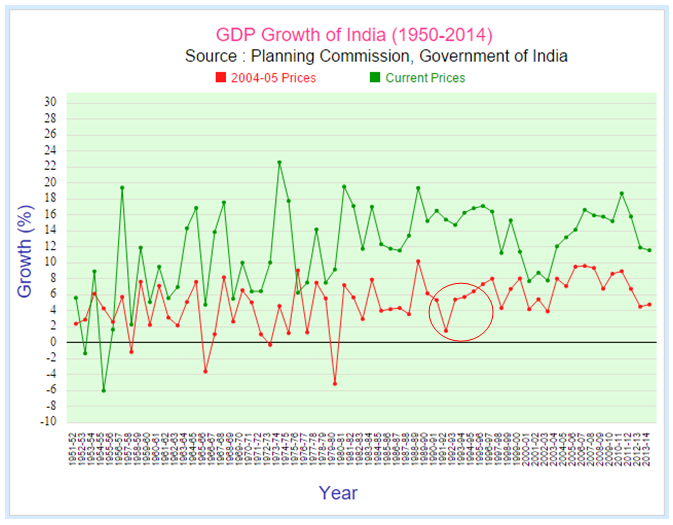 Let us now fast forward to 2016 – 17. Demonetization, another huge structural measure in our economy, is likely to have a negative impact on our GDP growth rate this year, but experts believe that, we will see the J-curve effect on economic growth due to demonetization in the coming years. Like Demonetization, the Goods and Services Tax (GST), which will replace indirect taxes in our economy, may very well have a J-curve effect on economic activity and growth. Structural economic reforms in our country is seen by some sections of the population, especially sections of the media and media influencers, as silver bullets but they are not. Implementing economic reforms that have a J-curve effect requires huge amounts of political capital that all Governments safely rely on; after all they have to contest elections every few years. But the J-curve, by its shape, has a longer term beneficial impact, despite the short term pain.

J-Curve in Business and Investments

J-Curve can be seen in action in other spheres of our economic lives. Businessmen and women among our readers would have seen a drop in profitability after a big investment (in technology, human resources, marketing etc.) or major changes in business strategy. Over a longer time-frame, however, the investments or strategic decisions pay off and result in higher revenues or profits. Awareness of the J-curve phenomenon can help businesses sustain themselves through the lean period and capitalize on future opportunities, when they come along.

J-curve is common in Private Equity and Venture Capital Investments, where the investor sees their Net Asset Value diminishing due to the general partner fees and immature assets. However, over a period of time, as the investments mature, investors will see a rise in their investment values (provided the fund made good investments) and will make a profit when the fund exits its various investments.

India’s GDP has grown from just $38 Billion in 1960 to more than $2 Trillion in 2015. After decades of low economic growth, Indian economy has seen J-curve shaped growth and is now the sixth largest economy in the world. By 2020, we GDP is forecasted to cross $3 Trillion economy and $5 Trillion economy soon afterwards. Economists expect that by 2030 India will become the third largest economy in the world after China and the United States of America (with a GDP of more than $10 Trillion). Equity market will be a direct beneficiary of the economic growth and as such, equity as an asset class in India is likely to give excellent returns to investors in the long term.

J-curve is an important phenomenon in economics, business and finance. In this blog post, we have tried to explain why this phenomenon takes place and how does it work in the future. Investors should understand J-curve effects, so that they are able to better understand the cash-flow / value profile of their investments over a time series and manage their investments more effectively.