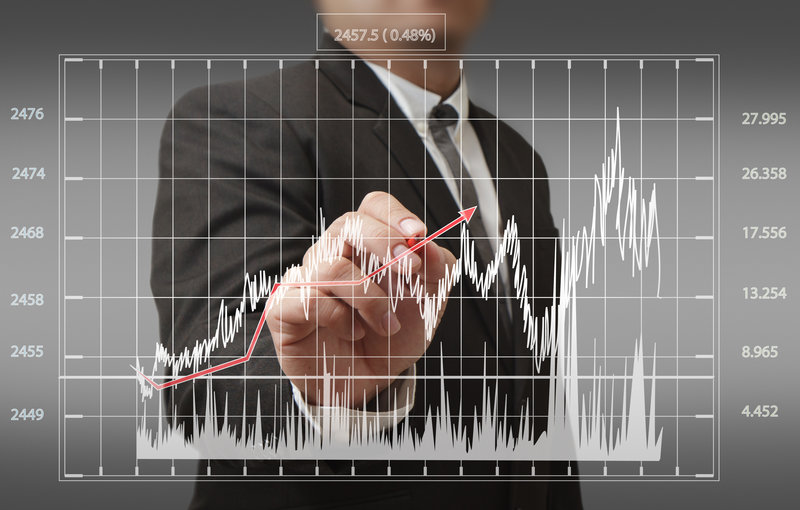 Systematic withdrawal plans are ideal for generating income in your post retirement years. In this blog post, we will discuss how systematic withdrawal plans in debt funds can give you the most tax efficient cash flows to meet your post retirement income needs. The tax advantage of Systematic Withdrawal Plan (SWP) in equity funds is obvious. If you start your SWP from equity funds after a year of your investments, the SWP withdrawals will be subject to long term capital gains tax, which is tax free for equity funds. But what are the tax implications of SWP in debt funds? After all, post retirement the majority of your assets should be fixed income or debt investments to ensure a much higher degree of capital protection. The tax advantage of returns from debt funds over fixed deposit interest for investments held for over 3 years for investors in the higher tax bracket is quite obvious, given the long term capital gains tax treatment of debt funds. As discussed earlier, long term capital gains from debt funds are taxed at 20% with indexation benefits while fixed deposit interest is taxed as per your tax rate. We will understand the difference in tax outgo with the help of example later in this post. However, some will argue that in the first three years the tax is the same for debt fund and fixed deposit income. While the tax treatment of debt fund and fixed deposit is the same in the first three years of the investment, your actual tax will not be same if you are getting your income from SWP in debt fund. It is our endeavour in Advisorkhoj to share knowledge with our readers on different investment options, so that they can get the maximum benefit from their investments. While all investors should endeavour to get the maximum out of their investment, this is especially important for senior citizens, since they are reliant on their investment income to meet their expenses.

The sub-heading may have surprised some of you, but you will understand how SWP from debt funds are superior to fixed deposit interest even in the first three years of the investment, once we walk through an example. Let us assume there are two investors, Pooja and Richa. Both are retired and are dependent on the income from their investments. Pooja has invested 10 lacs in an accrual debt mutual fund at the start of a financial year. Richa favours fixed deposits and has put the same amount as Pooja, i.e. 10 lacs in a bank fixed deposit on the same date. To make for apples to apples comparison, let us assume both the debt fund and the fixed deposit give 8% returns. Let us now see that Richa needs the income on a quarterly basis. Richa’s fixed deposit pays out interest every quarter. For her 10 lacs fixed deposit, she receives an interest of 20,000 every quarter. Pooja also needs the income on a quarterly basis. She has set up 20,000 quarterly SWP from her mutual fund investment. In an SWP, fixed cash flows are generated for the investor by redeeming a certain number of units based on the prevailing Net Asset Value (NAV) and the SWP amount required by the investor. Finally, let us assume that, both Pooja and Richa are in the highest (30.9% with surcharge) tax bracket. So both Pooja and Richa make the same investment. They get the same returns on their investments. They take the same cash flow from their investments. To simplify our analysis we have assumed no exit load. Let us now see, how much income tax each one has to pay in the first 3 years of the investment. Let us start with Richa first.

The table below shows how much tax Pooja has to pay, based on the method described earlier. 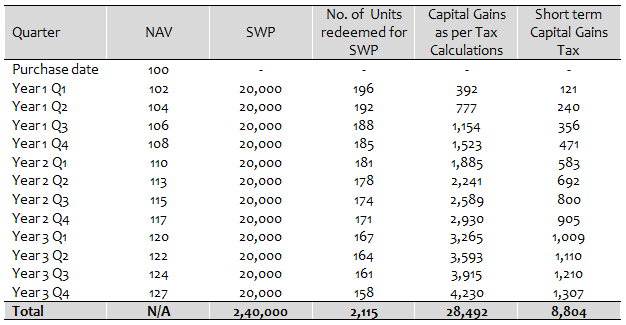 Richa will have to pay 74,160 as income tax, whereas Pooja will have to pay only 8,804 as tax. You can see that Pooja will have much less tax than Richa, even though both have the same cash flows. If you had earlier thought that debt funds give tax benefits only after three years, think again. You can see SWP from the debt funds are more tax efficient than fixed deposit interest even in the first three years. While in fixed deposits the tax is levied on your entire income, in mutual funds tax is levied only on the profit made by you on the units sold by you. Some investors think that in SWP the number of units owned by them goes down over time. You should be concerned with the value of your investment, not with how much units you own. The table below shows the value of Pooja’s investment, at the end of each quarter in the first three years.