Is the Indian equity market over valued at current levels 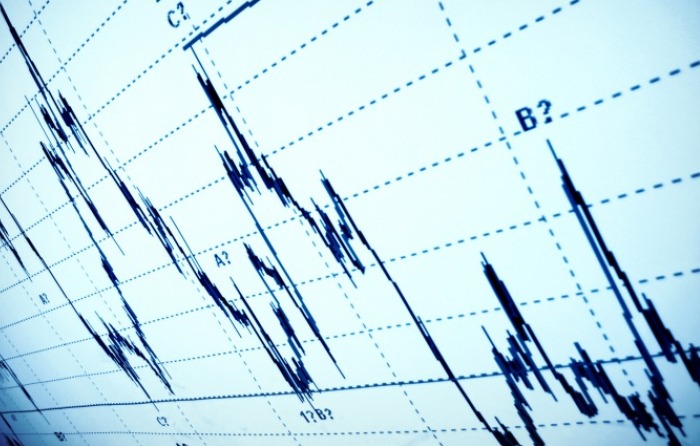 On the close of trading session on Friday the market closed at historical highs on positive global cues. The Sensex and Nifty closed at 27,866 and 8,322 respectively. In the last 12 months the Nifty has given a return of nearly 32%. The chart below shows the rally of the Nifty from 6,000 to current levels in the last one year. 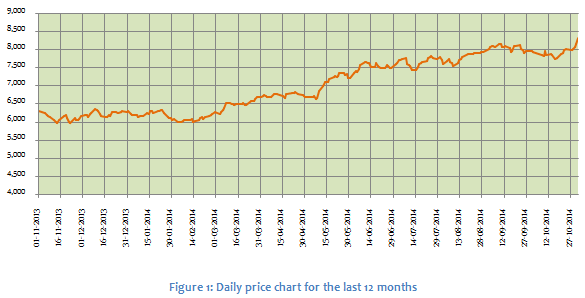 Whenever the market scales historical highs it causes both euphoria and trepidation. While the majority opinion about the market is bullish, some people are voicing concerns that the market is in the over-valued territory or thereabouts. Are these concerns real? It is true that corporate earnings have not kept pace with Nifty’s rise to dizzying heights in the last one year. If the market is indeed over-valued, then we may see a period of consolidation or even correction, till earnings catch up to justify the share prices. During such corrections from very high, one often sees panic selling causing markets to fall sharply. But before you rush to redeem your equity funds, let us rationally think about the question, is the Indian equity market is over-valued at current levels?

There is no definitive level that defines over-valuation or under-valuation. Share prices are determined by investor’s perceptions or expectations. Therefore the question is whether investors perceive the market to be over-valued? Investors do not want to over-pay for a stock. Among the several factors that influence share prices, price earnings ratio (P/E) is the one that is most widely used. P/E ratio is by no means the most accurate determinant of share prices. If it were, we would not have seen the outrageous valuations at the past bull market peaks. There are several other factors like liquidity, policy, sentiments etc. Nevertheless, P/E ratio can be used as a broad guidance for determining relative valuation of shares and the market. The Nifty is now trading at a P/E ratio of 21.6. Twelve months back the P/E ratio of Nifty was 18.2. Is the Nifty more expensive than it was 12 months back? Yes. But is it too high? Let us take a historical perspective. In April 2000 the Nifty was trading at a P/E ratio of 24.2, higher than what it is today. At the peak of the bull market in 2007 the Nifty was trading at a P/E ratio of 27.9, much higher than what is today. Even in 2010 and early 2011, the Nifty P/E ratio was near 24.5. The chart below shows the historical P/E ratios of the Nifty from April 1 2000 to the close of the last trading session (October 31 2014). 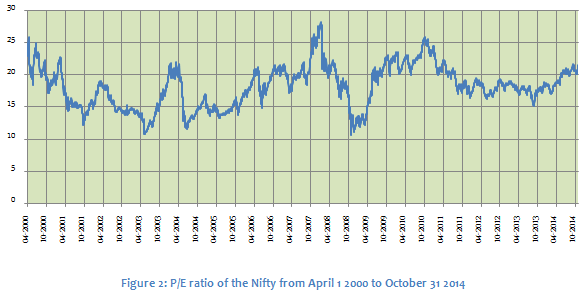 Given the sharp rise in the Sensex and Nifty in the last few days, we may see some profit booking and consolidation in the market. But market experts are of the opinion that the Nifty and Sensex will scale new highs in the coming months. Experts recommend staying invested and buying on dips. Investing in diversified equity funds through systematic investment plans is very effective during periods of volatility. We are still in the early stages of a secular bull market. You should not worry about timing the markets at this stage. Even at current levels, there is enough upside in equities for long term investors to create wealth.