Summary of the IPO

Reliance Nippon is one of the largest asset management companies in India. Despite increase in the number of players, the Indian mutual fund industry is largely remained concentrated with the top 10 largest AMC’s accounting for more than 80% of the industry’s total AUM between FY15 and FY17.

With increasing household savings and financial awareness among the investing population of India, there is gradual shift from physical saving to financial saving. Further, with demonetization, RERA implementation, and GST roll-out, value of real estate and gold as an investment option has reduced. Given the under-penetrated nature of MF industry coupled with first-mover advantage followed by well-diversified suite of products and multi-channel distribution network, we believe the company is set to benefit in the long run.

At Upper price band of Rs 252/-, company trades at 7.8x its FY17 P/B Value of Rs 32.2, which is fairly priced. Hence SUBSCRIBE TO THE ISSUE can be recommended on long term basis.

To invest in the IPO please click on the below links –

Jointly owned by Japan’s Nippon Life and Reliance Capital, the firm is the asset manager to Reliance Mutual Fund.

The issue, with a marquee price band of Rs 247-252 per equity share, will open on 25th and close on October 27, 2017. The offer by the manager of India’s third-biggest mutual fund by assets under management involves a 10 percent stake sale in the company.

The public issue would comprise of fresh issuance of 2.45 Crore shares, besides an offer for sale (OFS) of 1.12 Crore shares by Reliance Capital and 2.55 Crore shares by Nippon Life Insurance Company. The IPO size would be around 10 per cent of the post issue paid-up capital of the company.

Reliance Nippon Life Asset Management is the largest asset management company in India and has around Rs 359,000 Crores assets under management, including Rs 2.23 lakh Crores for mutual funds. “The idea is to be in a state of readiness for both growth opportunities that lie ahead and even more for the consolidation that will happen,” according to CEO Mr. Sundeep Sikka. According to him “the proceeds will be used for both organic and inorganic opportunities and growth for this company.”

The Reliance Capital-promoted company saw its revenues and profit after tax (PAT) rising at compound annual growth rates of 18.2 per cent and 15 per cent, respectively, over FY 13-17.

The Securities and Exchange Board of India (SEBI) issued its observations on the proposed IPO of Reliance Nippon on October 5, as per the latest update available on the regulator’s website. 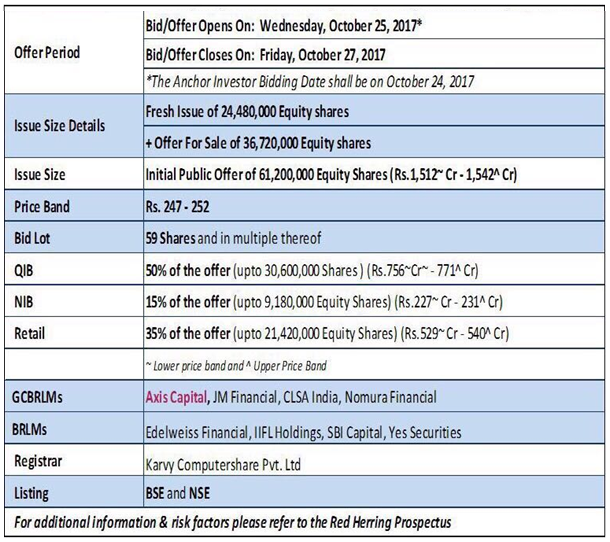 
Therefore we believe this is the right opportunity for you to invest in the IPO for the long term.