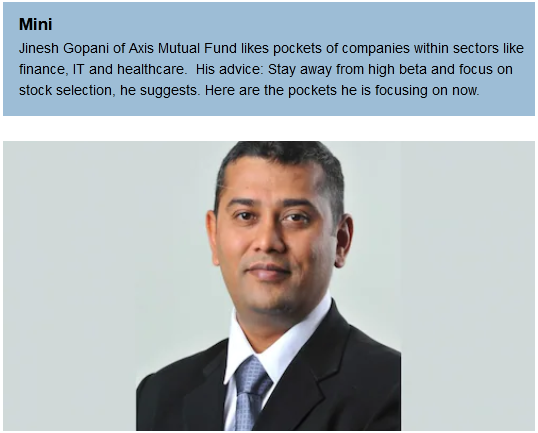 Have investors missed the bus when it comes to playing the India recovery theme on Dalal Street? Jinesh Gopani of Axis Mutual Fund remains bullish on India and suggests using any correction in the short term to deploy money for the long term. "The biggest loss for an Indian investor today is the opportunity cost of not investing," he said in an interview to CNBCTV18.com.

Banking on the long-term story of the Indian economy, Gopani believes the growth theme has existed in the Indian market even before the pandemic and is likely to remain a dominant theme for at least the next couple of years.

The veteran fund manager said Axis MF remains cautiously optimistic in its portfolios. His advice: Stay away from high beta and focus on stock selection.

"As bottom-up stock-specific investors, we like pockets of companies within sectors like finance, IT and healthcare. We have consciously refrained from holding high beta in the portfolio despite improving macro fundamentals primarily because the risk-reward does not justify holding these names at elevated valuations," said Gopani, Head of Equity at Axis MF, which has Rs 2.5 lakh crore in assets under management (AUM), as of November 2021.

The correction in the Indian market has been healthy so far, where certain pockets with expensive valuations and companies where earnings delivery was not up to the mark have been punished, he said. "Short-term corrections are always welcome in a bull cycle. It is the market's way of reminding investors to temper expectations and remain vigilant. At current levels, the market has given new opportunities to participate and top up our investments."

Asked if the market has digested warnings on sky-high valuations yet, he said: "There were many segments of the market where we saw froth in valuations. We have consciously remained away from those companies and sectors. India has been a global favourite for the last 18 months and this has resulted in the market doing well thus far."

Indian equity benchmarks have corrected more than six percent from all-time highs touched in October 2021 in the first major dip following a nearly one-sided, liquidity-driven rally in the past more than 18 months. 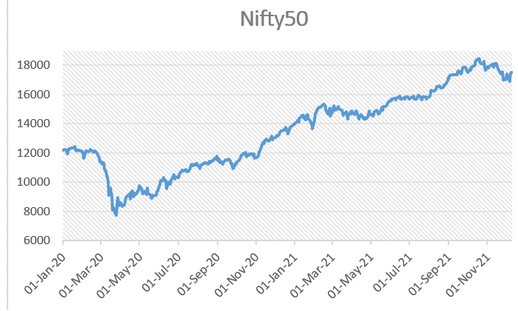 India continues to stand out among emerging markets because of its growth persistency. "When an entire nation consistently delivers on growth projections, global investors naturally favour the market over 5,10 and 15 years," he said.

The RBI in its fifth bi-monthly review decided to hold key rates at existing levels and to continue with its 'accommodative' stance, retaining its GDP growth forecast for FY22 at 9.5 percent. The central bank promised continued support for the economy amid concerns about the Omicron variant of COVID-19.

"As domestic investors, we should take short-term corrections as opportunities to add to long-term growth stories," the money manager added.

He believes the market has favoured mid-cap and small-cap segments so far, and believes a catch-up trade is due in large-cap names. "As mid and small caps take a breather, the segments that have not performed will compensate as the market regains its equilibrium," he said.

Gopani belongs to the club of fund managers that remains selective on IPOs now. His choosy stance on the primary market comes at a time when most IPOs have attractive robust investor interest, undeterred by the performance of few.

ALSO READ: What Shankar Sharma thinks new-age businesses will have to do

"As fundamental investors, our objective is to identify companies that can grow sustainably and profitably. Opportunities thus far have been few. We continue to explore our options and given a large number of opportunities to pick from, we will selectively allocate as and when the right opportunity comes along," he said.